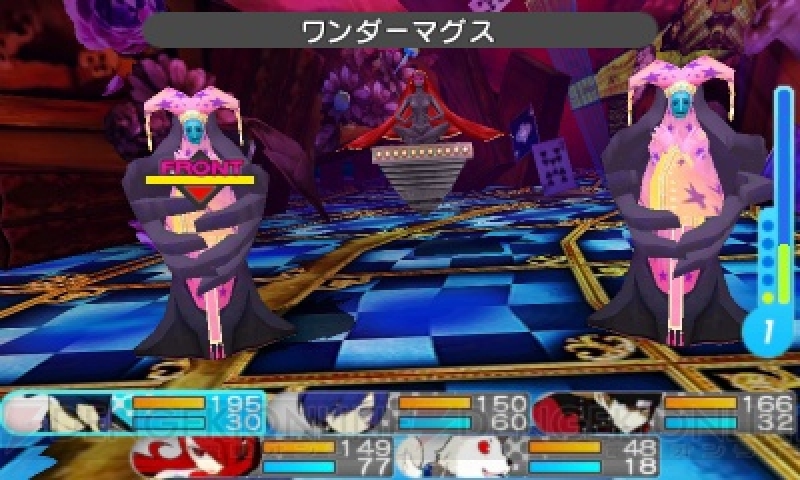 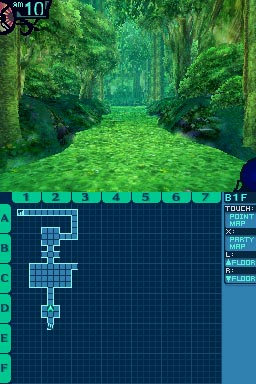 Drawing comparisons to titles such as Wizardry and The Bard's Tale, Etrian Odyssey challenges players with exploring and mapping a vast dungeon. Players navigate through the dungeon in fixed increments. Time passes only when an action is taken, causing movement, random encounters, and combat to all be entirely turn-based. The game uses a first-person view to present the dungeon using a combination of relatively simple 3D computer graphics for environments and single-frame 2D sprites for enemies. Etrian Odyssey requires that players maintain their own map by annotating (with the stylus) a small map displayed on the DS's touchscreen. The player is free to map accurately or haphazardly. However, the player cannot draw their own symbols, and must instead use the game's limited set of pre-designed symbols. The game also limits the number of symbols that can be used for each level map. In addition to normal random encounters, the player must overcome "FOEs" (Field On Enemies), which are exceptionally powerful monsters which wander around the dungeon in much the same way as the player's party, advancing whenever the player does. The AI of FOEs varies, but most will wander the dungeon in a set circular path until they sense the player's party, after which they will move directly towards the party. If the player encounters an FOE in an area with multiple FOEs, it is possible for a second or even third FOE to join the battle if it reaches the party before they defeat the first one. Like most early RPGs, Etrian Odyssey uses custom characters from a number of different character classes. While only five characters can be in the party at a single time, a much larger number can be created and kept in waiting back at the "guild hall". Characters can be switched in and out of the party when in town, so if a given specialty is needed for a specific obstacle, the party can be tailored appropriately. The player allocates skill points to specific skills during level advancement.