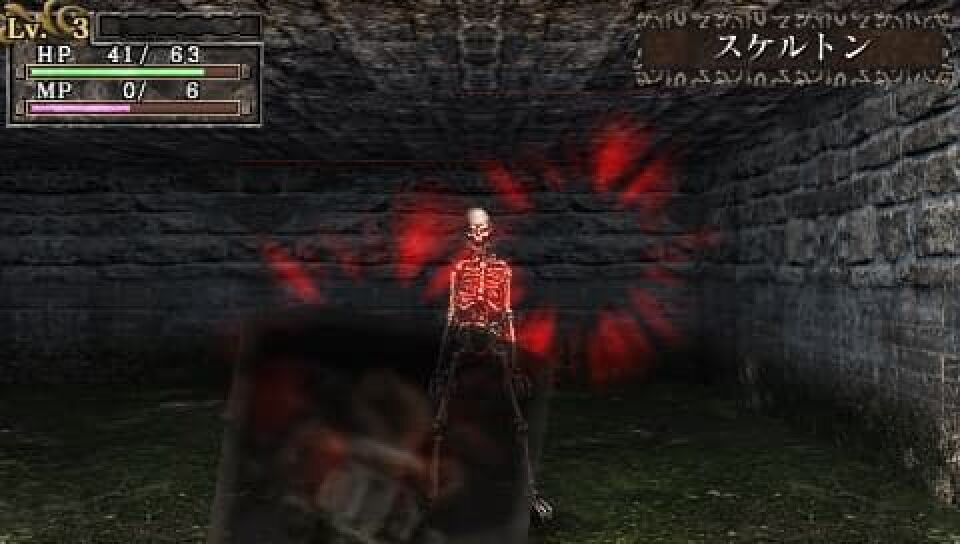 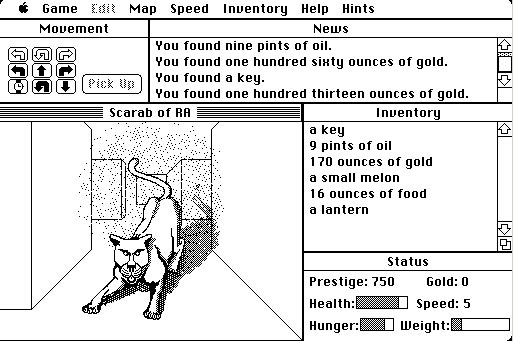 Scarab of Ra is a classic crawler for the Mac OS set within an Egyptian pyramid.A sandstorm has uncovered the Great Pyramid of Ra. The player, a lowly archaeology student, decides to learn its secrets and tell of its wonders. After securing food and a lantern on short notice, the player enters the pyramid with hopes of finding additional equipment abandoned by earlier expeditions. Gameplay is that of a simplified roguelike game. Each new game is randomised, death is permanent and the player can only save by quitting. Death is frequent and quick, forcing players to make the most of their skills and careful use of all items they come across. Many items have several uses that the player must either discover through experimentation or use of an in-game hint system. Levels are square mazes that grow larger as the player descends, simulating the design of a pyramid. The first level is 3x3, totalling 9 squares. Each succeeding level is one step larger in each dimension (so the next level is 4x4 steps, for a total of 16 squares, and so on). A key on each must be found to unlock the next level. Ascension is impossible, which can strand players if an important item is left behind. The pyramid also contains traps, which can harm the player in various ways, and animals, including cobras, lionesses, thieving monkeys, and a mummy, which appears only to players who carry the Scarab of Ra. Animal threats can be dealt with in a number of ways, but only the mummy can be destroyed; the game's author notes that violence is distasteful, but "the mummy was dead anyway." Movement is turn-based, with a speed setting that alters how many moves other characters can make after the player acts. Speeds range from 1 (slowest) to 10 (fastest), with a map automatically drawn at speeds 5 and below. The map can be accessed and marked at any point, and is an invaluable tool as the levels become larger and more involved. Traveling at high speeds consumes less food and oil, but the player may blunder into danger and movements will not be recorded on the map if over speed 5. Traps are less likely to be triggered and sleeping animals are less likely to be woken when walking at slower speeds, but it consumes more food and oil.