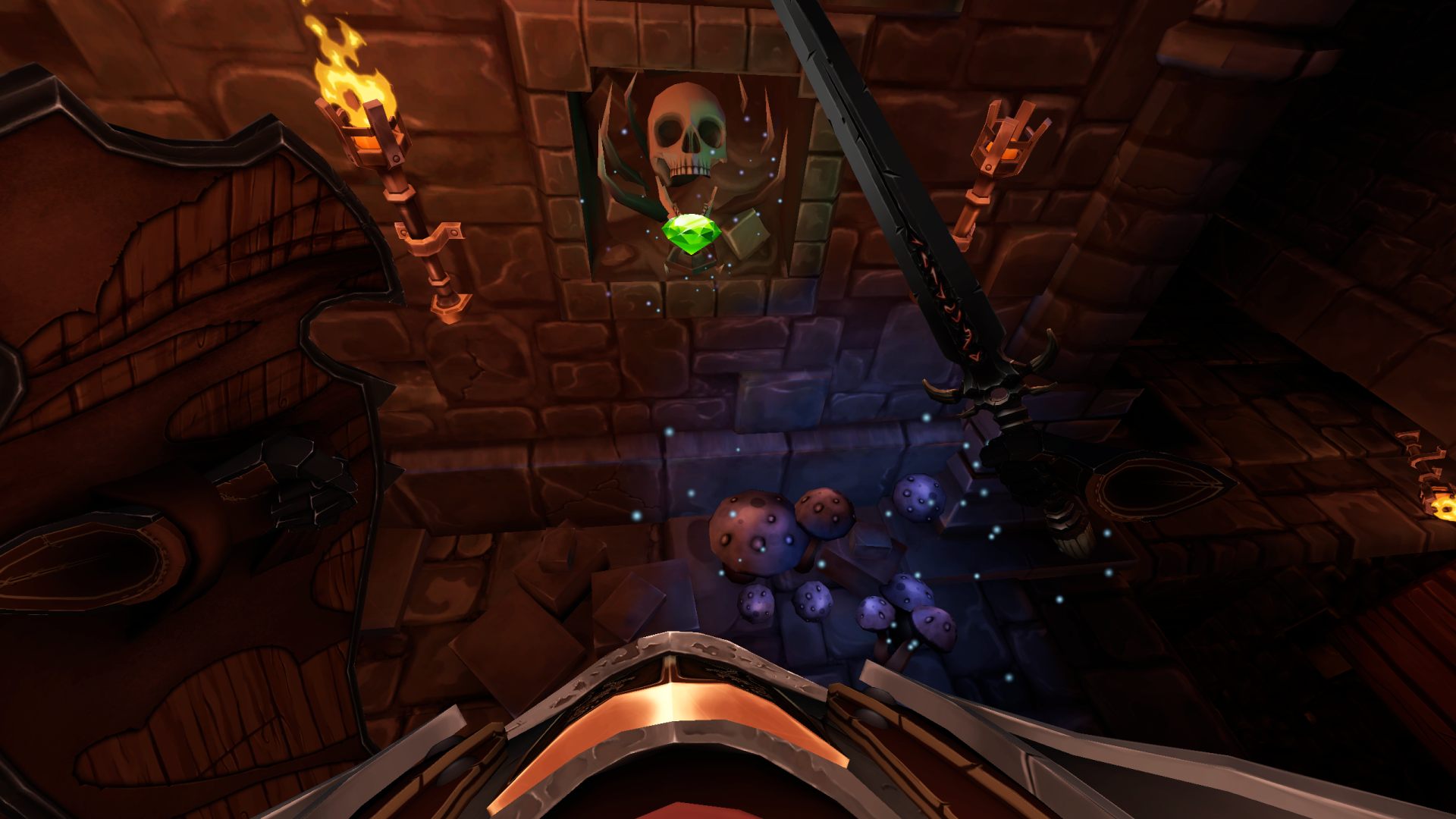 Legends of Amberland is a turn-based, party-based dungeon crawler taking place in a classical fantasy world where you have to find a missing crown to ultimately gather the forces of good to stand against the armies threatening the kingdoms of men and their allied races. Though to call it a dungeon crawler is a misnomer, this is very much modeled after the classic Might and Magic 3: Isles of Terra, and like most Might and Magic games you really crawl a massive world with very shallow locations.

This is not really a complaint (or not entirely), it’s the main characteristic of these games, a big massive world with many locations to discover, but the dungeons themselves are just simplistic one or two-level abodes with lots of enemies to kill and a few doors to open, but nothing else. If you get lucky you find some trap fields later on, but nothing that overly complicates the level design. Which makes sense, if every dungeon had the complexity of says a typical Wizardry games usually representing one massive dungeon, it would take a massive amount of work to even finish a small portion of the world.

Because this is modeled so much after Might and Magic 3, it takes on the same strengths and flaws, but also because it’s a streamlined version of that kind of game with a little bit less complexity, due to being the creation of one indie developer and not a development studio in its prime, it is a bit weaker in comparison than its inspiration.

Might and Magic 3 (and 4 an 5 as well) were games that had a fixed number of enemies in each region and no random encounters. Once you cleared out all monsters, you could either destroy their spawning ground forever or let them respawn in a year’s in-game time. Legends of Amberland does not give you that option, there really are no respawns, only a fixed number of enemies and that’s it. This makes for a game where a lot of the world feels a bit empty once you finished all the encounters. This is good for game balance reasons, but I think if prefer games where I still feel like having encounters a couple of times even in regions I cleared out. 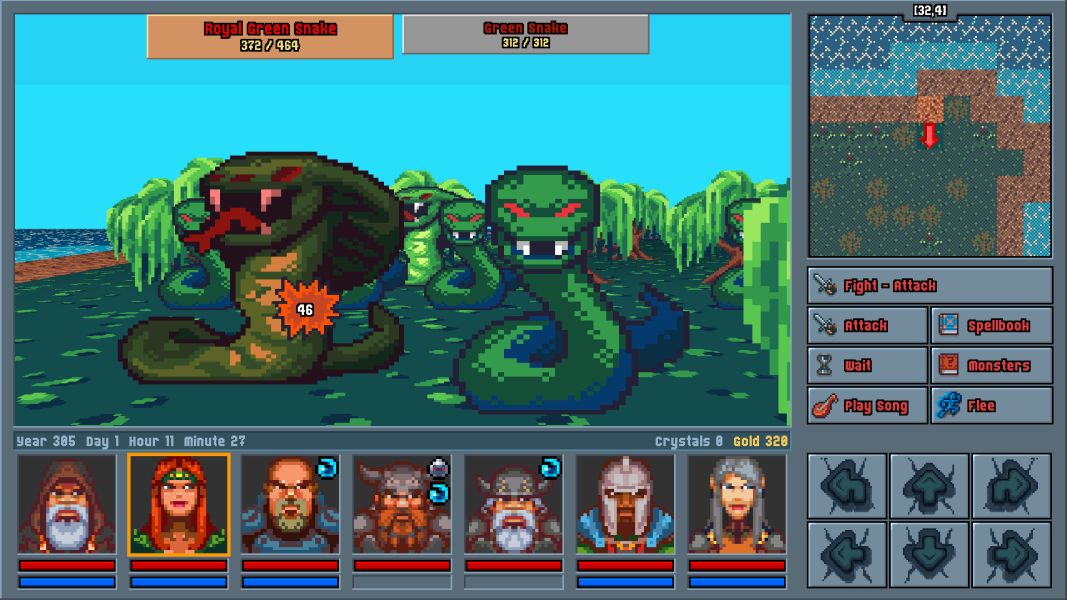 Another element that Legends of Amberland lacks compared to its inspirations is puzzles. It does have a lot of quests, almost any NPC you meet gives you something to do and the bigger story often hinges upon advancing one of the main quests. But these are very straightforward fetch quests most of the time that really involves you getting from point A to B, bringing various items to point C, or any combination thereof. Might and Magic 3/4/5 had no straightforward quests in the same sense that Legends of Amberland does (nor did they have a quest log, which was a really neat improvement LoA implemented), but they had a lot of puzzles that were foreshadowed in other places.

Not plate puzzles or finding that one wall where there’s a button to push, but real puzzles where you had to figure out an answer based on what was said, and some helping hints you could find in various locations. Now you might not like that design much, but it presented barriers to progress besides combat, and since combat in Might and Magic 3/4/5 was not particularly deep otherwise (although quite fun in its own way) it helped to make the games feel more difficult and involving (especially since those games came out before the internet with its easy access to solutions, so if you got stumped on a puzzle you really got stumped for days).

So far I’ve spoken mostly about the things where it looks like Legends of Amberland doesn’t measure up, so I try to make the case going forward why this is still a game worthy to play. For all the things the game feels like a weaker version of an almost 30-year old game, we shouldn’t forget that one was made by what would be an AA-studio or even AAA-studio by today’s standard (granted those old studios look very much like slightly larger indie studios of today, but they also had critical infrastructure in place and monetary resources to pull off developing larger games) versus a single indie developer today.

What Legends of Amberland does well is to capture that addictive loop of going out, exploring a part of the map, killing everything so that you can then slink back to a city to heal and do it all over again. There’s a varied number of enemies that don’t just look visually different (and sport great pixel art) but also attack with different effects and weapons. Usually, the best approach is to maneuver your group such that you can take out enemies in single encounters, or at least kill them fast enough that they can’t do much damage anymore until more enemies arrive (three is the most you have to face in a group, but in most cases, you don’t want this).

The game also has streamlined equipment, there’s much less of it and with less variability than in the Might and Magics, but on the other hand, you still find more than you can actually need. And as the game imposes a very strict weight limit on what each character can equip, getting the best equipment and using the best equipment is rarely the same thing. This means you will spend a lot of time trying to optimize the weapons and armors and trinkets your characters are using. Thankfully, while equipped equipment is limited by weight, you have an infinite inventory for all the stuff you find and you won’t have to worry about leaving stuff behind. 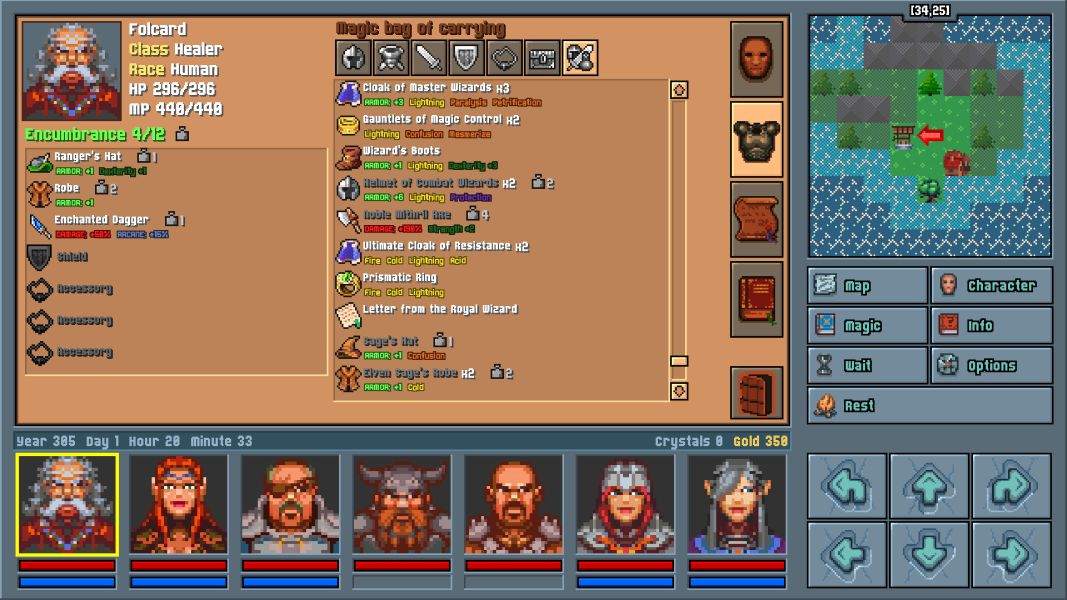 Overall, I really liked the way how the game handled equipment and while it sometimes drove me crazy not being able to equip the best stuff for all my characters, it was fun trying to optimize the equipment build of my characters. This was something I didn’t think about much during character creation, but it does have a bigger impact so I was somewhat fortunate that my main tanks had a good carrying capacity.

Character creation is the usual, although it’s a bit odd to be allowed to create 7 and not 6 characters, but I won’t complain. The rest is the usual fantasy races and classes, with some class specializations that won’t mean much when you start the game (except if you have some meta-knowledge) so just go with what seems fun. Overall, while there aren’t any really unique or unusual choices, it’s the usual fantasy stuff well implemented. Same as the progression, your tanks and damage dealers will be the most important characters in the beginning, mages only will become relevant later, although both physical and magical players remain relevant until the end.

The world design, the dungeon design, the monsters, there’s nothing here you haven’t seen in other games, but it’s all well-made and quite fun to go through. Sometimes you want to play a game that does a lot of new and clever things, and sometimes you want to have a new experience based on all the things you liked about your favorite fantasy RPGs from the past. And Legends of Amberland delivers exactly that. It has lots of great looking enemies, it gives you swamps and deserts and mage towers and castles and mines and many other dungeons to explore. 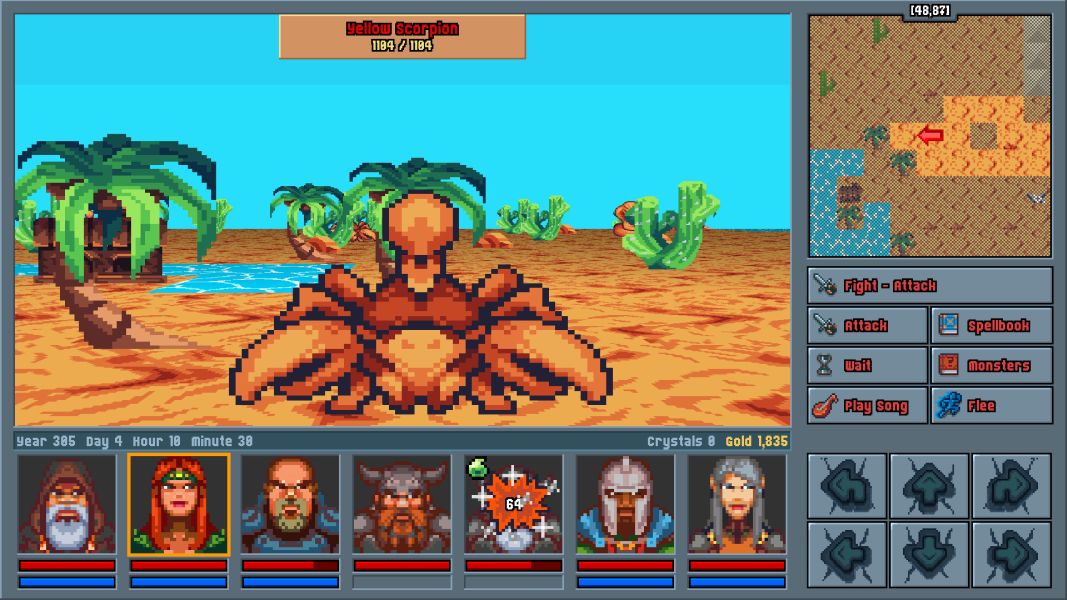 I like how varied the wall designs are for a crawler and how each dungeon has seemingly its own musical theme (I really enjoyed the music of the game, almost no tune I found annoying). While the dungeons themselves are a bit simple, again almost like Might and Magic dungeons, they never overstay their welcome and try their very best to be somewhat different from each other.

It’s really a game that knows what it wants to be, is laser-focused on delivering that experience and if you happen to be part of the target audience for it, it’s hard to dislike (except if you wanted Might and Magic 3/4/5 improved and not streamlined because then you might come away somewhat disappointed). And since there aren’t many world crawlers in that mold on the market currently, I wholeheartedly recommend the game, even if it’s not the most complex or deep, it scratches an itch few other games currently do.

That said, if there’s ever a sequel, I really hope the developer reconsiders and makes the whole a bit more dynamic with respawning enemies and other stuff that makes it last longer and make it a bit more challenging. Even if you go for the highest difficulty, it only makes enemies more able to tank damage, which in turn means more trips back to the city to heal, but not a fundamental change in your tactics.

This is a very minor rewrite of the review I published on fpgcrawl and it's the second review I did of Legends of Amberland, the first was on my usual blog entropypump (and republished on Steam).

I also painstakingly remade the worldmap of Legends of Amberland in GridCartographer, here is he map as a picture and here's the map file for those interested (beware for those who haven't played yet and don't want to get spoiled by seeing the whole map).